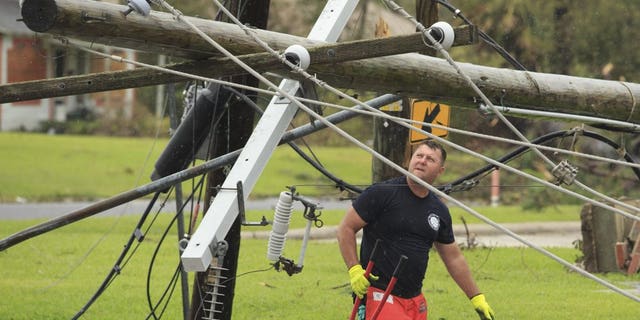 Laura victims may go weeks without power; US deaths reach 14

US President Donald Trump has flown to Louisiana to survey the damage left behind by Hurricane Laura.

President Donald Trump on Saturday visited Louisiana and Texas, pummeled this week by Hurricane Laura though the storm did not inflict the catastrophic damage and death toll of Hurricane Katrina 15 years ago.

"It's been a great state for me", he said in Lake Charles. Trump deplaned wearing a red had that said "USA" on the front, and "TRUMP" on the back.

"You are helping Texas to rebuild", Trump told the governor. The governor responded that about 50% did.

"I'm here to support the great people of Louisiana".

He said: "I never even boarded up my windows. And we'll supply what we have to supply". More than 580,000 coastal residents evacuated in the midst of the coronavirus pandemic. Trump did not meet with residents.

Mr Edwards said Laura was the most powerful hurricane to strike the state.

His stops, first in Louisiana and later in Texas, came two days after the Category 4 storm slammed the Gulf Coast, leaving at least 16 dead and wreaking havoc with severe winds and flooding.

Laura made landfall last Thursday morning, packing winds of 241kmh, some of the strongest to hit the region in more than a century.

On Friday, Trump approved a declaration that made FEMA funding available for Louisiana.

"You came together and you rebuilt". "And here we are today, and you're going to have this situation taken of very, very quickly".

Sasol did not indicate how much production would be impacted but said it was engaging with its customers and suppliers and would update the market when it had more certainty. "But this is as bad as I've ever seen it, folks".

Ted Cruz, R-Texas. Before a flyover to view damaged areas, Trump and other officials visited the emergency operations centre in Orange County to discuss storm damage and the government response.

He began the briefing by noting the damage to Louisiana, saying the state "went through something pretty bad".

"I think those are the two prime things that, especially in Louisiana, they're fighting with: getting their power restored and getting that water turned on so people can return to their homes", explained FEMA administrator Peter Gaynor.