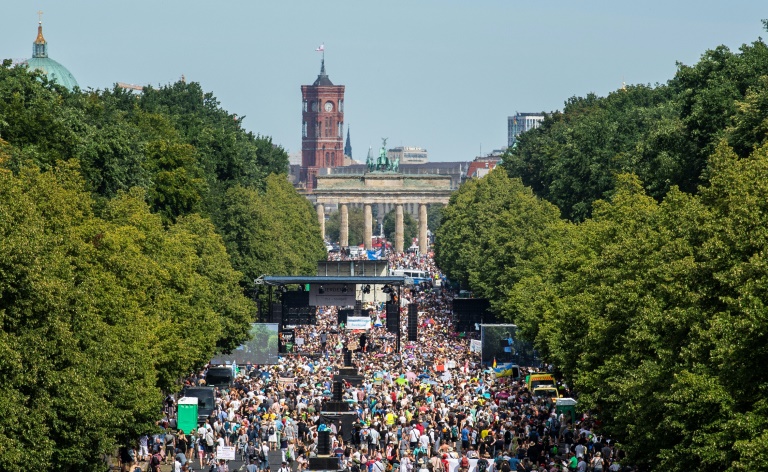 "Participants in a demonstration that the AfD and NPD also helped mobilize tried to storm the Reichstag", parliamentarian for Germany's Green party Konstantin von Notz said, referring to two far-right parties in Germany.

Police used pepper spray to drive back the protesters, who earlier in the day had participated in a large rally through the capital.

The incident occurred after a daylong demonstration by tens of thousands of people opposed to the wearing of masks and other government measures meant to stop the spread of the new coronavirus.

Photos of the protest, which was organized and promoted by far-right groups and outlets, show many attendees representing far-right conspiracy theory QAnon.

About 300 people were arrested in front of the Reichstag and following an incident at the Russian Embassy, according to police.

At a demonstration close to Brandenburg Gate, several thousand were still gathered by early evening, some throwing rocks and bottles.

But on the eve of the demo, Berlin's administrative court sided with the demonstrators, saying there was no indication that organisers would "deliberately ignore" social distancing rules and endanger public health.

But new daily infections have accelerated in recent weeks, as in much of the world.

"I think there's a line and if someone takes to the streets with neo-Nazis then they've crossed that line", said Verena, a counterprotester from Berlin who declined to give her full last name.

The court ruling said, "The gatherings planned by several initiatives for August 29 against the corona policy of the federal and state governments can take place".

Rallies protesting against coronavirus restrictions took places in other European cities with some demonstrators calling the virus a hoax, said the BBC reported.

The police did not issue a permit for the rally to go ahead due to safety violations and protesters not wearing face masks, but some demonstrators still marched in downtown Berlin.

It didn't impose a requirement for participants to wear masks, which aren't mandatory outdoors in Germany but encouraged when social distancing can't be maintained. Police watched closely but did not intervene.

"Those are the people who have become disaffected with these rules ..."

Masks are now required everywhere in public in Paris as authorities warn that infections are growing exponentially.

Chancellor Angela Merkel initially responded to the coronavirus with swift and strict lockdown measures and widespread testing, and it appeared to have worked, with Germany's death toll remaining low.