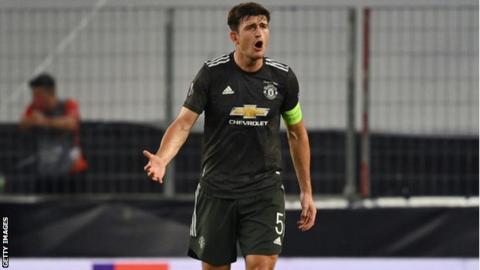 Manchester United captain Harry Maguire is a free man for now after he was arrested in the Greek island of Mykonos on Thursday evening.

A Greek police statement on Friday said that three men aged 27, 28 and 29 had been arrested in Mykonos. Policemen were called to the scene and attempted to break up the brawl at around midnight.

"The soccer player was verbally abusive to an officer and then hit him", law enforcement told Reuters.

"There were several policemen there".

One of the suspects then tried to bribe the officers to hush up the incident, the police said.

The England footballer was arrested following an alleged fight on the island of Mykonos on Thursday night, along with two other Britons.

Quoting Petros Vassilakis, a police spokesman, it's claimed that at least two policemen were "thrown down" after one of the men aimed a swing.

"The three foreigners were taken to the Mykonos Police Station, where upon their arrival they strongly resisted, pushing and beating three police officers". They did not give names.

Maguire, who was on holiday in Greece, joined United from Leicester for £80million - a world record fee for a defender - a year ago.

The Greek daily newspaper Proto Thema said while the centre back was allowed to walk free - and return to the United Kingdom if he wanted - his trial had been postponed until Tuesday and will take place before a three-member panel of judges in Syros's criminal court.

United on Friday said in a brief statement they were "aware of an alleged incident involving Harry Maguire in Mykonos last night".

"Contact has been made with Harry, and he is fully cooperating with the Greek authorities".

"At this time we will be making no further comment", the club added. Manager Ole Gunnar Solskjær quickly made him a captain.

But the club will be back in pre-season training in two weeks and could begin the new Premier League campaign in less than a month. The $104.8 million defender was on vacation after a UEFA Europa League semifinal defeat to Sevilla when he was allegedly accused of hitting a local officer after a brawl broke out between English tourists.