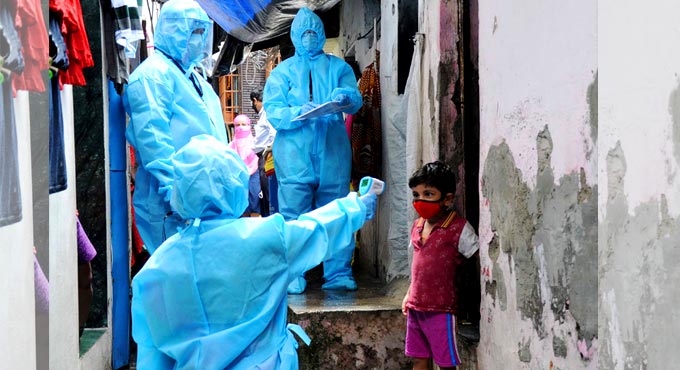 The Ministry of Health and Family Welfare (MoHFW), Government of India, reported 25,000 cases and 613 deaths in 24 hours - the biggest daily spike since the first case was detected in late January.

The death toll due to the disease climbed to over 20,000, while the total number of tests for detection of Covid-19 also crossed the one-crore mark in India on Monday.

The Health Ministry said that the Union Government has emphasised on increasing testing, prompt contact tracing, and timely clinical management of the COVID19 cases. Out of the total number of covid cases, 2,59,557 are active while 4,39,948 have been either cured, discharged or migrated.

Delhi, India's capital, leads the country in new Covid-19 cases, according to the BBC, with a lack of testing and contract tracing playing a small role in the massive caseload. India is the only country where cases doubled in less than 20 days (red) on all three dates.

A member of Central Industrial Security Force (CISF) personnel stands guard inside the empty premises of the historic Taj Mahal during a nationwide lockdown to slow the spread of COVID-19, in Agra, India, April 2, 2020.

"It is important to test more because you can not devise strategies for the remaining 99% of the population by looking at statistics coming from just 1% of the country's population", Dr T Jacob John, former virology head at the Christian Medical College, Vellore, was quoted by a media report as saying.

Jharkhand has registered 20 deaths, Chhattisgarh and Assam 14 each, Puducherry 12, Himachal Pradesh 11, Goa seven, Chandigarh six, Arunachal Pradesh two and Meghalaya, Tripura and Ladakh have reported one fatality each, according to the Health Ministry. New Delhi and Mumbai each has about 100,000 cases, with 3,000 dead in the capital and almost 5,000 in Mumbai.