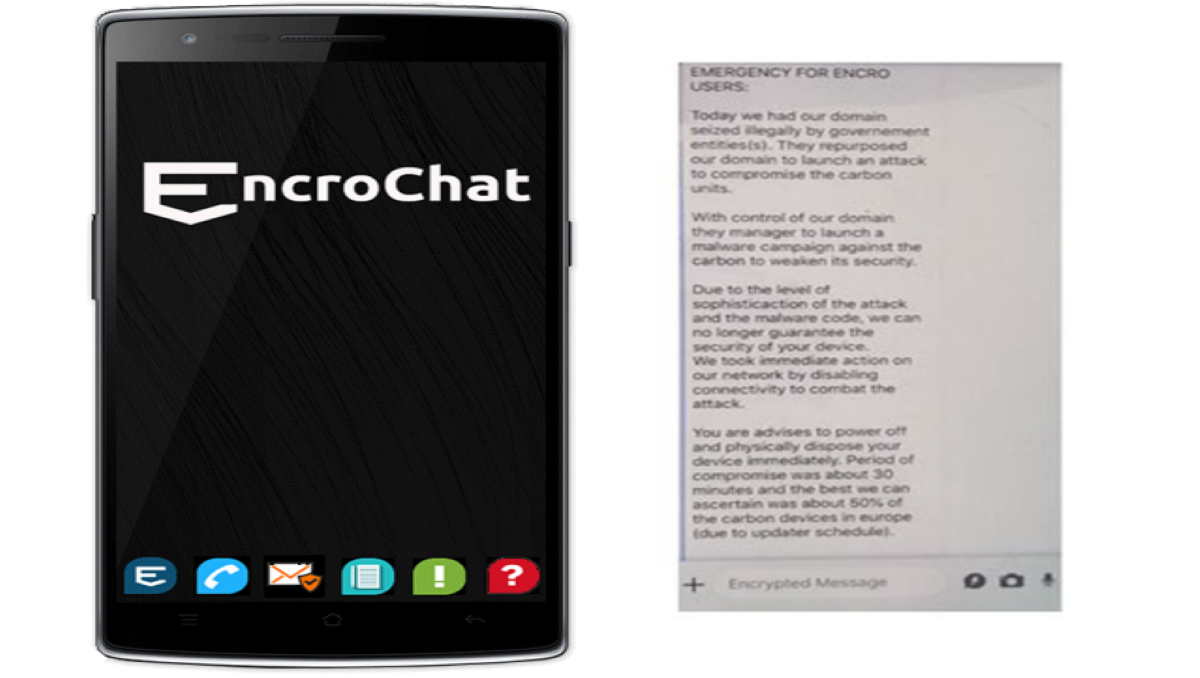 United Kingdom police have arrested more than 700 people after successfully infiltrating a secure messaging system used by criminals to plan money laundering, the murder of rival criminals, and the sale of illegal goods.

The investigation was set up in 2017 with French police when it came across an increasing number of EncroChat phones, and assisted by European crime fighting agencies Europol and Eurojust.

Major crime figures were among over 800 Europe-wide arrests after messages on EncroChat were intercepted and decoded. Rather like Blackberry once did, EncroChat provided customized hardware, a dedicated OS, and its own servers to users, providing an expensive service costing thousands per year rather than a one-time purchase or download. "A large number of suspects have also been arrested in several countries which were not participating in the JIT (joint investigation team) but particularly affected by the illegal use of these phones by individuals active in organized crime, including in the UK, Sweden, and Norway", Europol said.

An estimated 60,000 people, among them up to 10,000 in Britain, subscribe to Encrochat, which works on customised Android phones and, according to its website, provides "worry-free secure communications". They have openly discussed plots to murder, launder money, deal drugs and sell firearms capable of causing atrocious scenes in our communities.

Lord Advocate James Wolffe QC added: "This operation highlights the value of partnership working between the agencies which take part in the Serious Organised Crime Taskforce".

French and Dutch police informed that they hacked into the EncroChat network so they could gain access to millions of text messages of suspects as they chatted with custom-made devices. This gave them means of communicating between each other which they thought were safe.

Encryption jumbles messages in transit, and is widely accepted to be one of the best ways of hiding from online snoopers.

Since 2016, the NCA has worked with worldwide law enforcement agencies to target EncroChat and other encrypted criminal communications platforms.

"Serious organised crime is complex but working together with our Regional Organised Crimes Units and the National Crime Agency we have achieved an unparalleled victory against the kingpin criminals whose criminal activity and violence intimidates and exploits the most vulnerable". "If NCA, then we have a big problem... the police are having a field day", they read.

"They were brazen and thought they were beyond the reach of the law", said Metropolitan Police Commissioner Cressida Dick. The group behind EncroChat operates from outside the UK. Holland said criminals with encrypted devices "should be very, very anxious".