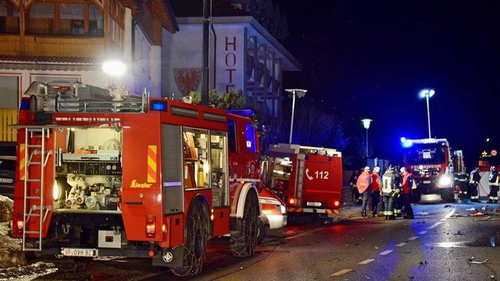 Emergency personnel at the scene in northern Italy

Some people were propelled dozens of metres by the impact of the auto, AFP reports.

Six young Germans were killed and 11 others injured when a speeding auto hit their group in northern Italy.

Media reports said the driver may have been drunk.

Italian news reports said the driver's blood alcohol level was almost four times the legal limit, and that he slammed into the tourists as they were getting off their bus and returning home after an evening out.

Some of them were propelled dozens of metres by the impact.

Helmut Abfalterer of the Lutago volunteer fire service told the Tageszeitung Online portal the aftermath "looked like a battlefield".

The driver of the vehicle - a man in his late 20s - was arrested and is now in hospital.

The injured, four of whom were in critical condition, were taken to several regional hospitals, including two who were airlifted to a hospital in Innsbruck, Austria, said Bolzano Carabinieri Commander Alessandro Coassin. Eleven other people were injured, including two from the region.

He was arrested and put in hospital under police guard.

Roughly 160 emergency workers went at the scene and a field hospital was set up by the road.

Lutago, in the picturesque Aurina valley, is popular with tourists who ski at Klausberg and Speikboden.

Last week, three Germans - a woman and two girls, one of them aged seven - were killed in an avalanche in South Tyrol.